Last week we kicked off our first Multithreaded Data event, where John Myles White gave a talk about Julia, a new programming language that some of us love. It’s the first of many exciting talks to come at Stitch Fix. Our next invited speaker is Hadley Wickham, who will be talking about how to get data into R. If you’re in the SF bay area and the topic excites you, keep an eye out for our upcoming events!

Why Julia Matters for Data Science 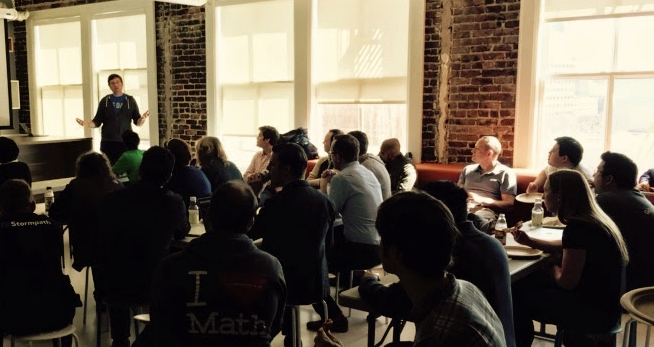 Let’s face it, R and Python are slow

To describe what’s wrong with the current generation of programming languages, John walked us through an example of writing a naive implementation of Brownian motion in R:

Computing a single sample from this process for n = 10,000,000 takes around 35 seconds in R. Here’s a translation of that R code into Julia:

This implementation takes only 0.14 seconds to run - a whopping 250x faster than R. Some of the main reasons why the R interpreter executes so much more slowly than the Julia compiler include:

Taken collectively, John argued that most of the time that the R interpreter uses to generate a single sample using this Brownian motion code isn’t strictly necessary to producing the correct result. In other words, the R interpreter executes code that exists only to deal with possibilities that don’t often arise in practice.

So what makes Julia so efficient?

John closed his talk by describing the reasons why it’s so much easier to do type inference in Julia than in R or Python. Given the difficulty of employing the specific compiler techniques being used to speed up Julia, John described some alternative compiler techniques we might expect to see developed for R and Python, but noted that these techniques are often more technically challenging to implement correctly. Some examples are PyPy, Numba, and R LLVM. The advantages of these experimental compilers could be great, but they could require substantially more development effort to achieve similar results to Julia’s existing compiler.

Given those difficulties, John believes that Julia is best positioned to be the next generation data science language in the future. It’s still a young language today and the language is rapidly evolving. If you’re an active R or Python user and you’re comfortable with your tools, it’s best to stick with them for now. But, if you’d like to pay the pioneer tax and potentially shape one of the next-generation languages, bringing Julia into your toolchain is a great way to go.