Here at the Stitch Fix algorithms team we have several devoted Warriors fans and hence we had to investigate these claims – from a data science point of view, of course. Our analyses revealed two key findings, which we will discuss in this post:

The basic mental model behind this post is the following: if we can generate matchup-level predictions that are blind to recent win/loss momentum, and these predictions also rank GSW as the best team last year, then the success was meant to be.

In order to model this, we wanted to understand the impact of player archetypes on a team’s probability to win a given matchup. Specifically, we modeled how the allocation of minutes across archetypes – which depends on the roster and coaching decisions – affects a team’s ability to win basketball games in the NBA.

In other words, this approach focuses on the DNA of the team, rather than momentum and synergistic events on the court. Thus, we’re essentially investigating if Golden State had the best DNA last season.

Note that the archetypes are essentially a simplified view of player performance. This creates robustness (larger sample sizes than individual players) and we avoid (to some degree) modeling the presence of a single superstar, which would not agree with our basic mental model.

Step 2: Predicting the Outcome of a Matchup

While the k-means clustering in step 1 discovers archetypes in an unsupervised fashion, the model built in this step estimates the importance of the various archetypes in terms of predicting wins and losses:

On the other hand, the model does know how many minutes the coaches allocate to each archetype, which means that we’re effectively controlling for injuries. Also, the difference in minutes allocated does partially reflect the quality of the coach.

Compare the predictions for each matchup to the actual outcomes. This step is the crux of the analysis. As stated above, our argument is based on the premise that, if this simple model agrees with reality, then the success was not due to luck or some magic synergy-based momentum.

As mentioned above, the archetypes were created using k-means clustering of box scores from the 2011-2013 seasons. The following variables were used to form the clusters:

Note that the archetypes are simplifications of the actual players — they’re simply a set of centroids from the k-means clustering. In order to understand the clusters better, we created a heatmap and mapped the 25 most active archetypes (in terms of minutes played) to players during the 2014-2015 season. The player names on the right side show the most representative players from each cluster during the 2014-2015 season. The values in the heatmap are for the centroids of each cluster.

The heat map shows that Stephen Curry — the season MVP — belongs to an efficient archetype with a high average of three-pointers made. It also shows that the closest archetypes are represented by players such as Chris Paul and Kyrie Irving.

Predicting the Outcome of a Matchup

This is where we translate minutes allocated across player archetypes into the probability of a given team winning a matchup by estimating the importance of the various archetypes. We’ll discuss this model by covering three overall sections:

The regression model used in step 2 above is based on the simple idea that the winner of a matchup can be predicted by comparing minutes allocated to the different clusters during the game. Specifically, for each team we create the following variables:

From these variables we capture the differences between the two teams, during the given matchup, by constructing the “delta variables” given by

The model is a logistic regression model given by

where \(H\) is a pooled home court indicator that is not specific to a team (using team-specific home court advantage would break the mental model of the analysis). The coefficients, \(\beta\_1, \ldots, \beta_{51}\), are updated on a 90-day rolling basis using L1 regularization (lasso) to promote sparseness and reduce the chance of overfitting (due to the large number of parameters compared to data points). Thus, we are solving the problem,

where \(L(\cdot)\) is the negative log-likelihood function for a standard logistic regression and \(\lambda\) determines the level of penalty applied to the model. This can be done using the glmnet package in R, which also allows for estimation of \(\lambda\) using v-fold cross-validation.

As mentioned, we are re-estimating every day during the season using a trailing 90 game-day window (i.e., excluding days with no games). The justification behind this is the following:

The probability of team 1 winning the matchup is given by

and we predict that team 1 will win when \(p>0.5\). Note that for a given 90-day window, several variables can have coefficients that have been shrunk to \(0\) – i.e., deselected by the L1 regularization.

The model was validated using one-day-ahead validations, which means that we are using historical data from the previous 90 game days to predict the outcomes of the next day.

Using this validation scheme, the accuracy in terms of correctly guessing the outcome of an individual game (across all teams) was \(63\%\) for the first half of the season and 66% for the second half (including playoffs). The area under the ROC curve for the first half is \(0.68\) and \(0.71\) for the second half. Overall, these are decent validation numbers given the simplicity of the model, and it is good to see that the model got better over time.

In terms of ranking teams by winning percentages – i.e., getting the overall number of wins right for the last season, but not necessarily each individual game – the model does quite well. We’ll see this in the next section.

This is where we test our hypothesis. As stated above our mental model is that, if the “simpleton” model agrees with the outcome of last season as well as the playoffs, Golden State’s success was meant to be. 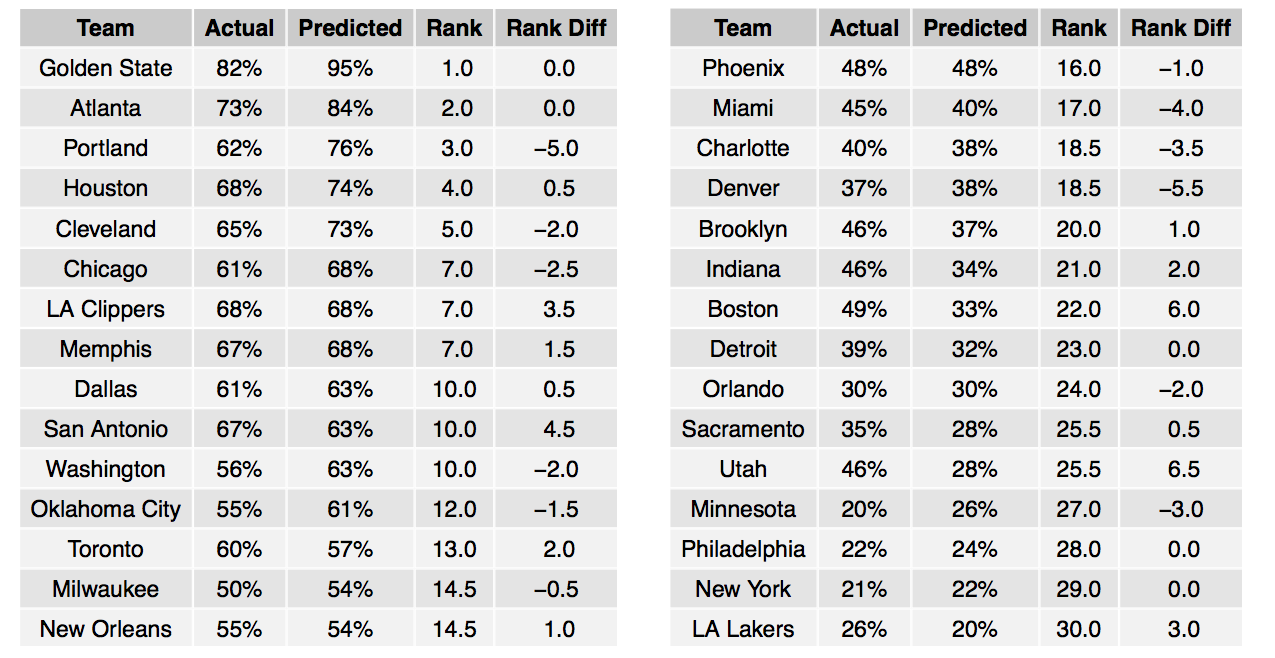 So, Why is Golden State a Good Team?

The regression model and archetype analysis confirmed two things Warriors fans already know: Steph Curry is in a league of his own, and the team has the right players available at the right time.

Steph Curry is in a league of his own

According to the model coefficients, Curry belongs to an important archetype. Additionally, Curry was the only player who consistently matched this archetype in every game throughout the 2014-2015 season. In other words, Curry is consistent, efficient and helps his team win. For comparison, Damian Lillard only matched the same archetype as Curry for 30% of the 2014-2015 season.

The right players at the right time

Golden State were able to allocate more minutes than its opponents to several key archetypes. This suggests that Golden State’s roster is deep and varied – i.e., the team has strong DNA – and that the coaching staff knows how to distribute minutes efficiently and to adapt to opponents.

The charts below help illustrate this for the 2014-2015 season: the “width” of the bars illustrates the importance of the archetypes and the length illustrates the amount of surplus in minutes allocated (these are the \(D_j\) variables in the logistic regression model). Note that the Timberwolves allocated more minutes than its opponents to lower performing archetypes, which explains why they only won \(20\%\) of games last year.

What if Kevin Love and Kyrie Irving Had Played?

We’ve all heard the speculations that Cleveland would have won if Kevin Love and Kyrie Irving had been healthy. Naturally, we thought this would be a good question to model. Here is how we went about it:

This analysis painted an interesting, yet credible story: the model back-predicted a \(54\%\) chance that the Cavaliers would have won in Cleveland and \(53\%\) chance that Golden State would have defended its home court. Based on these predictions, Golden state would be favored to win the series by a very narrow margin. In other words, if Kevin Love and Kyrie Irving had been healthy, it would likely have been a very close, hard-fought seven-game series with Golden State ultimately prevailing due to home court advantage. Could it have gone both ways? Of course, but we had to pick a winner.

If we were to use this model going forward — not for back-predicting to prove a hypothesis — we’d have to make assumptions about minutes played for each player and then map those minutes to archetypes. This would create an interesting what-if scenario environment where coaches can play with minute allocation scenarios prior to a game, just like businesses run scenarios during quarterly and annual planning.

It goes without saying that no bullet proof argument exists for whether or not Golden State’s success was due to superior DNA or luck. Our approach is just one view and it’s possible that another group of data scientists would arrive at a different answer. No one will ever know.

However, based on this analysis, as well as an amazing 5-0 start to the current season — including a win over the Clippers whose coach has been advancing the “luck argument” — we feel good about Golden State’s chances of repeating the success of last season. In fact, only four other teams in NBA history have started 5-0 and the cumulative point differential so far this season is the fifth-best margin through five consecutive games in NBA history.

The DNA (archetype composition) is pretty much the same as last season, but the Warriors may be even better this season. We plan to keep monitoring this by creating ongoing predictions and insights using this model. Stay tuned.