Two weeks ago there was a lot of buzz around Erik Bernhardsson’s blog post, where he trained an autoencoder on more than 50,000 fonts. The results are fantastic and if you haven’t seen it yet, go check it out. A few months back we released a package called fauxtograph, which performs unsupervised deep learning on images via variational autoencoding (VAE). Less than a week ago we implemented some big changes in fauxtograph where convolutional and adversarial network (GAN) capabilities were added. So how will the updates in the package do with the fonts dataset that Erik shared?

We will train both VAE and GAN models on fonts and then explore the font-space by printing out arbitrary strings in a font that interpolates between randomly generated fonts using our trained models. This post follows along a Jupyter Notebook that will take us through the necessary elements to achieve our end goal.

To follow along with the notebook make sure to do the following:

Now we’ll import the VAE and GAN model classes from fauxtograph as well as the dependencies to read the dataset and display images in the notebook.

Import and Inspect the Data

Next we’ll read in and inspect our data to see what our data looks like. 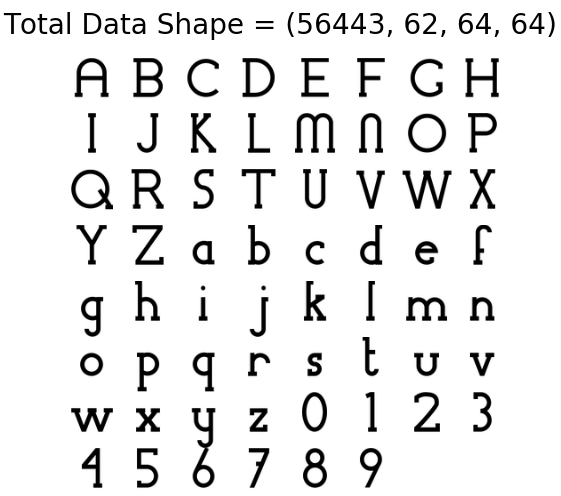 We see that there are 56,443 fonts where the individual characters are 64x64 grayscale images. Moreover, each font has an upper-case sequence, a lower-case sequence, and then the digits 0-9 for a total of 62 characters a piece. It would appear that punctuation marks, etc. are left out of this set, but these should be interesting enough.

Now that we’ve had a chance to inspect the data we can use the VAE and GAN classes from fauxtograph that we imported earlier to train our generative model.

The following code instantiates the classes then trains them, outputting periodic updates in the form of randomly generated fonts for us to inspect as it trains. If you don’t have a CUDA-capable gpu then just set the flag_gpu argument to False

Notice: This process takes some time to fully converge, but you should start to notice reasonable generated images in a few minutes on a GPU. If you’d like to skip this process, see the section below where we simply import a trained model.

A Sidenote on Training Methods (for those more familiar with ConvNets)

You’ll note below that, for the VAE, we are training all 62 characters of the set as separate image channels. In practice this is a bad decision because it allows for cross talk in the network between different letter channels which should otherwise be treated separately. However, it allows us to use the VAE to generate arbitrary strings in generated fonts, which is cool enough to sacrifice some reconstruction performance for this post. If you are serious about modeling the font reconstructions though, you should be feeding the letters in one at a time (as is done when training the GAN below), ideally adding a one-hot encoding at the latent stage…or you could do something similar with an adversarial autoencoder.

While our models are training let’s to go over the different unsupervised model types we will be using. The first class, VAE, stands for Variational Auto-encoder. If you are unfamiliar with these types of models then you might find it useful to read my previous post or view my talk on applying these models to images of clothing.

The second class, GAN, stands for Generative Adversarial Networks. In these types of models we pit two neural networks against one another. The first network is called a Generator. It takes a random system of numbers (a vector) and tries to use those numbers to generate an image. The other network is called a Discriminator. It processes both the randomly generated images from the Generator and training images from a dataset, then it tries to predict whether the processed images came from the Generator or the training set.

In this way the two networks compete against one another, and through iteration each makes the other better at its given task. Over time the Generator can become rather adept at producing reasonable looking images from the starting chosen vector, thus as with the VAE, we can use the generative portion of the model to generate new fonts.

Whether you’ve chosen to train your own model or use one of the pre-trained ones here, we can load a trained model by with each class by calling the load() method. The method simply takes in the paths of the saved model files as well as the class metadata and then outputs the trained model instance.

Now we can finally explore the font space by writing an arbitrary string, then rendering that string in random fonts generated from our model. The function below with interpolate over a distance of stride=15 characters between random fonts encoded in our model.

Since we have used our GAN to encode over a two dimensional space, we can actually visualize the encoding space as an image by using each discrete grid point in a cartesian grid as an input to our generator. Doing so we can see how the letter ‘A’ that we trained our model on above transforms by moving along each axis. 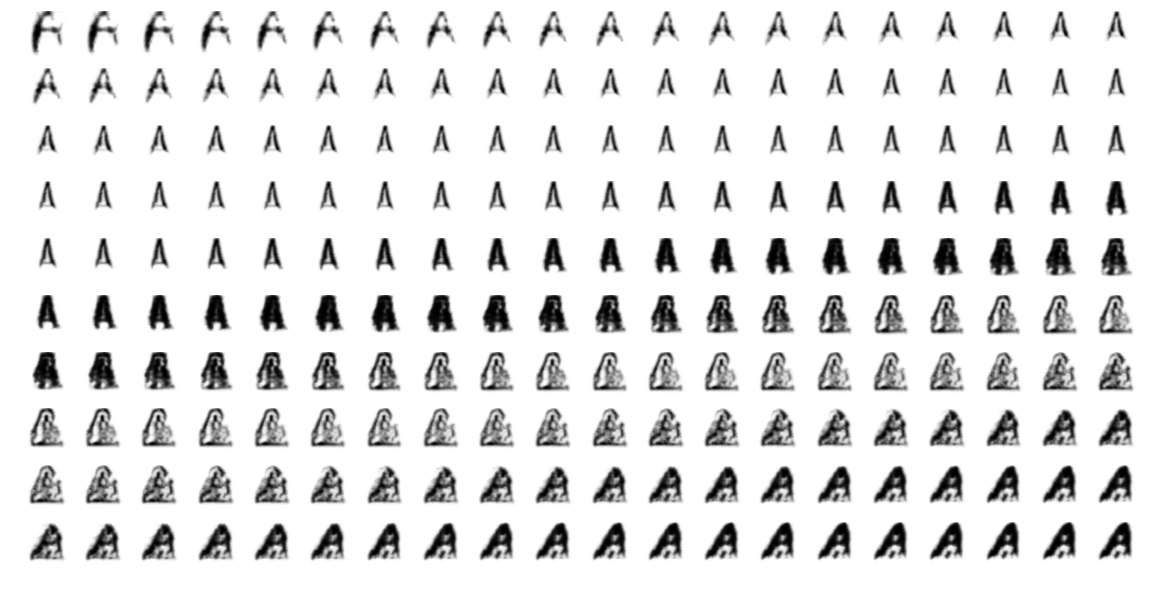 Hopefully you’ve gotten a sense over the course of this post how you might use some of the generative capabilities of both VAE and GAN models. The aim of the fauxtograph package is to make work like this reasonably accessible to anyone with some knowledge of Python. Feel free to try out different datasets for yourself. You’ll find more info and an additional example notebook, applying the VAE/GAN hybrid algorithm, in the fauxtograph GitHub repo.