Note: Predictions will be continually updated on Kim’s Github repo

Does the World Really Need Another Statistical Prediction Model?

When Donald Trump won the 2016 presidential election, both sides of the political spectrum were surprised. The prediction models didn’t see it coming and the Nate Silvers of the world took some heat for that (although Nate Silver himself got pretty close). After this, a lot of people would probably agree that the world doesn’t need another statistical prediction model.

So, should we turn our backs on forecasting models? No, we just need to revise our expectations. George Box once reminded us that statistical models are, at best, useful approximations of the real world. With the recent hype around data science and “money balling” this point is often overlooked.

What should we then expect from a statistical model? A statistical model should help us process the many moving parts that often affect a given outcome – such as an election – by providing a single prediction for the future. It does this by combining the multitude of inputs, assumptions, trends and correlations with a simplified representation of how the world works. The human mind cannot do this and that is what makes models so valuable. However, if the inputs are bad even a good model is going to be wrong. Moreover, no model predicts the unthinkable unless unthinkable assumptions are made.

So what does this have to do with basketball? In many ways, basketball is a perfect case study for forecasting. The outcome of future games are affected by many different factors; a team’s current performance, momentum, the strength of its roster compared to its opponents, as well as the travel schedule. If a team looks great on paper and it’s winning games, it’ll likely do well in the future. But factors like injuries, coaching changes, and trades can curtail success very quickly. Thus, any model-based prediction is only accurate until something happens that is unaccounted for in the model.

This post discusses a new data-driven approach to predicting the outcome of NBA games. I call this the Elastic NBA Rankings. If you love statistics, R and basketball, then this is the post for you.

While it’s certain that the model is wrong – all models are – I’m hoping that it will also be useful.

Summary – What You Need to Know About the Elastic NBA Rankings

The Elastic NBA Team Rankings is based on statistical modeling techniques frequently used across various industries to predict bankruptcy, fraud or customer buying behavior. No qualitative data or judgment is used to decide the ranks or the importance of different variables; the only human judgment applied is the underlying framework and features behind the algorithm.

At a high level, the model depends on three overall factors:

The team rankings produced by this model mainly agree with other prediction models (such as FiveThirtyEight) – at least when it comes to identifying the strong teams and the weak teams (the “tail teams”). There are some interesting differences, such as different predictions for the Portland Trailblazers, which I will analyze later in this post.

Back testing for the 2015-2016 season showed promising results (see more details below), although I have not done any historical benchmark testing against other models. Time will be the judge.

What Does the Model Actually Predict?

The model predicts the outcome of future NBA games for the current season. It does not predict the points scored, only the probability of a given team winning.

Where to Find the Model Predictions

All rankings and scores can be found in this github repo.

The easiest way to read the predictions with, for example, R is to directly read the raw CSV files: https://raw.githubusercontent.com/klarsen1/NBA_RANKINGS/master/rankings (see R examples below).

The predictions will be updated weekly with a new time-stamp.

There are two main files of interest:

In addition, the modeldetails directory has information on the underlying details of the model. See more details below on how to use this data.

How the Model Works

The model is based on a three-step procedure:

Why is the model called “Elastic NBA Rankings?” There are two reasons for this: first, the model automatically adapts as the season progresses. Second, the regularization technique used to fit the logistic regression model is a special case of the Elastic Net.

Some Notes on the Model Used in Step 2

The model used to predict the winner of a given game is a statistical model that is estimated based on the most recent three seasons. Hence, the relative importance (weights) of the various drivers – for example, the importance of roster features versus win percentages – are purely based on the relationships detected from the data. For the stats-minded readers, the model is a regularized logistic regression using glmnet. V-fold cross-validation was used to choose the penalty parameters.

The model is re-estimated every single day and contains the following variables:

For a given match-up, the following variables are created (made-up example)

How Are Players Assigned to Archetypes?

The outcome of the k-means clustering routine is 25 centroids where each centroid represents the box score profile of an archetype. Players are assigned to archetypes by matching their offensive and defensive box score statistics to closest centroids using the Euclidean distance, and hence can switch archetypes at any given time. A decay function was applied such that more recent games receive a larger weight. In addition, games played in the previous season are discounted by a factor of 4 (before the coefficients are estimated).

In order to calculate the deficit and surplus variables referenced above, it’s necessary to predict how many minutes each player will play. Currently, a 90-day trailing average is used (excluding the off-season). Games played during the prior season are discounted by a factor of 4 (again, before the coefficients are estimated).

Deciding the Winner of a Game

I’ve also been experimenting with a simulation approach where each game is “re-played” 1000 times, varying the distribution of minutes across archetypes in each iteration. For the overall aggregate rankings this did not alter the overall conclusion, although it did provide a better measure of prediction uncertainties. For example, for the 2015 validation, the model predicted that Golden State would have won all its games (see example below). A simulation approach would have done a better job incorporating uncertainty, and so I might still end up going with that.

For simulation playoffs I have been using the simulation approach due to the uncertainty introduced by the hierarchical playoff tree. This will be covered in another post. 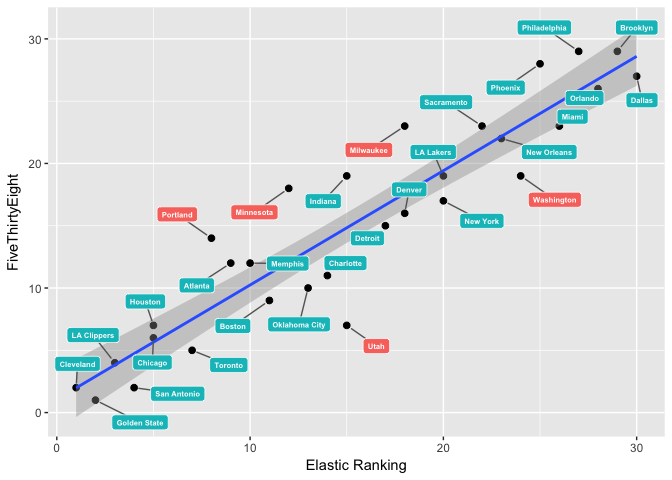 The table shows that the elastic rankings generally agree with FiveThirtyEight – at least when it comes to the “tail teams.” For example, all rankings agree that Golden State, Cleveland and the Clippers will have strong seasons, while Philadelphia and New Orleans will struggle to win games.

Here’s how this works: the underlying predictive variables were multiplied by their respective coefficients, and then aggregated to get the group contributions to the predicted log-odds. The CSV file called score_decomp_2016_MM_DD contains this information. The code below shows how to use this file: 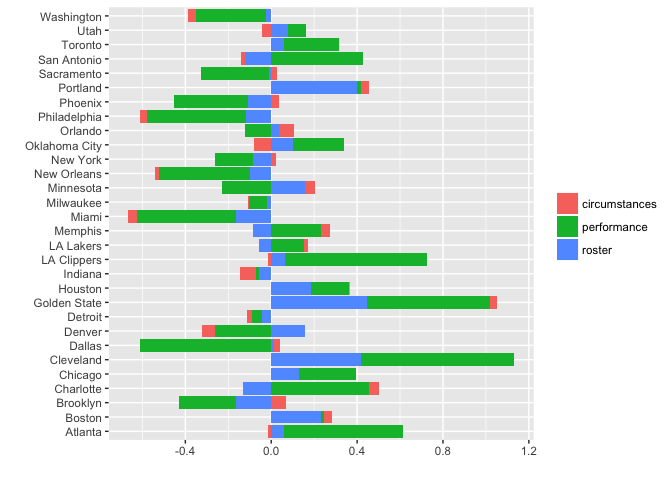 The bars show the contribution from each part of the model. As expected, circumstances do not affect the overall prediction for the entire season as most teams have similarly taxing schedules. However, contributions from performance (weighted winning percentages) and roster (surplus of important archetypes) vary considerably.

First, let’s take a look at Portland: the model likes Portland’s chances because it thinks its roster is strong relative to its opponents’ rosters – although performance has not been stellar so far.

Next, let’s look at Cleveland and Golden State. The model ranks these two teams at the top, both in terms of rosters and performance. In fact, my playoff simulations have these two teams meeting again in the finals and going to seven games (more on that in a later post).

Last, but not least, let’s take a look at San Antonio and the Timberwolves – two teams that are viewed very differently by the model. According to the model, San Antonio has been over-performing. The model does not like how the roster looks on paper, yet performance has been strong so far. This could be due to strong coaching, corporate knowledge (as Gregg Popovich calls it) and team chemistry – factors that the roster component of the model does not capture. Minnesota, on the other hand, is under-performing according to the model; the roster is rated highly compared to its opponents, but the team is not performing well. This could be due to inexperience.

The model was used to predict all games from 2015-11-20 to the end the 2015-2016 season, using only information available as of 2015-11-19 (including model coefficients). This is roughly a five month forecast window (the season ends in April); most teams played around 70 games during this period.

The game level accuracy (using 50% as the probability cutoff to declare winners) for the entire period was 65.8% – i.e., the model predicted the correct winner for 65.8% of games.

The area under the ROC curve – generated by comparing the estimated probabilities to the win/loss indicator – was 0.744.

The code below compares the actual rankings to the predicted rankings (note that this table only covers the games played after 2015-11-19): 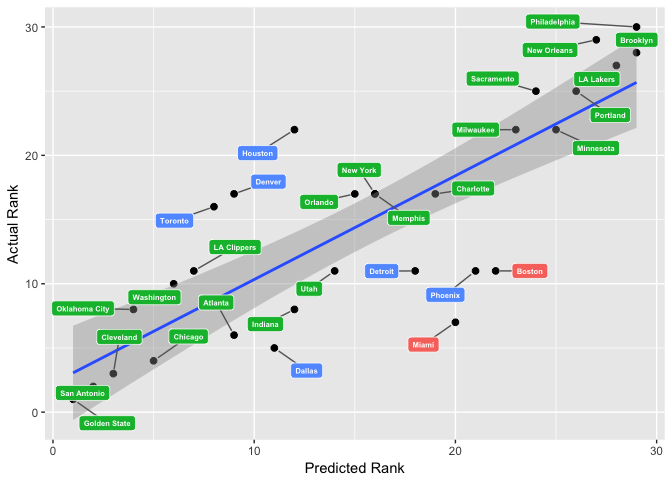 The predicted team rankings were also in line with the actual team rankings, except for some big differences (e.g., Miami or Boston). There might be good reasons why the model misjudged these teams from a ranking perspective, given the fact that the predictions were made only 11 games into the season. More investigation needed here.

Next, let’s check the game-level match-rates for the predictions (a match here means that the model correctly predicts the winner of the game using the 50% probability cutoff). The chart below shows the game-level accuracy for each team. The vertical lines show the overall match rate (65.8%) as well as the match rate we would get from a random draw (50%): 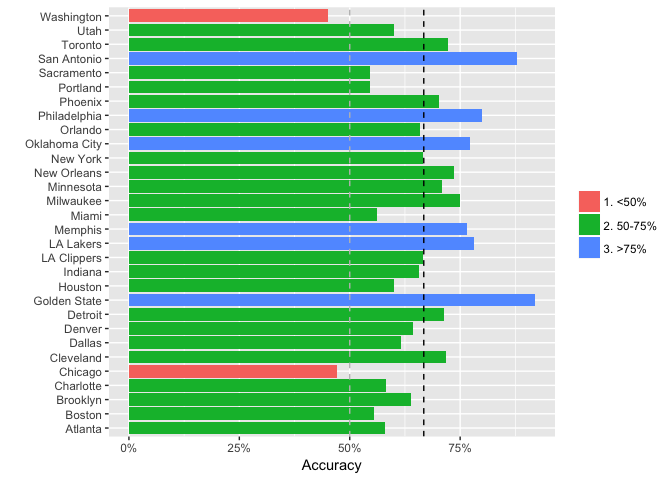 Note that the model is most accurate for the “tail teams” such as Golden State and Philadelphia, which is to be expected. There are a some teams where the model completely missed the mark – such as Chicago and Washington — but overall is the model is doing fairly well considering length of the forecast window.

Dealing With Injuries and Trades

As mentioned previously, the model depends on rosters and previous performance. If a team executes a major mid-season trade, the roster component will react immediately while the performance component will be slower to react (based on a 90 day window). There are a number of ways around this, but currently no special treatment is being applied.

The model currently does not capture any interaction between the archetypes. I have tested basic two-way interaction terms, but that did not help much. More work is needed here.

Currently, the model ranks teams by predicting win rates. This means that, holding everything else constant, the rankings implicitly favor teams that play in weaker divisions. A future development could be to have two rankings: one that predicts the win rate given the current schedule (this is what the model is currently doing), and one that normalizes for schedule differences.