In this installment of our “Patterns of Service-oriented Architecture” series, we’re going to talk about a complex concept called idempotency, and a technique you can apply to your service design to ensure that requested work is only performed once.

Prevent duplicate requests by allowing the Consumer of a Service to send a value that represents the uniqueness of a request, so that no request with the same unique value is attempted more than once.

It’s possible—and likely—for a service to perform operations that cannot be undone. For example, charging a customer money cannot be cleanly rolled back once completed. For Services like this, Consumers of the Service need a way to be absolutely sure that their request of that Service had exactly one effect. Stated another way, the service’s calls should be idempotent.

The problem is that the Service might not know enough to ensure idempotence. For example, if a customer makes two purchases for the same amount, the Server can’t tell if this is really two purchases, or if a single purchase is being retried (e.g. due to a network failure that caused the first to get interrupted).

In order to ensure idempotency, the Server would need to know a lot about the use-cases of its Consumers. Instead, the Consumer can provide a unique identifier for each unique interaction. For example, if each purchase has a unique id, the Consumer can pass that id along with the purchase request. The Server will then make sure it does not service the same request twice.

In the purchasing example, suppose there was only one purchase, and the Consumer was interrupted and tried again, using the original purchase ID. The Server can locate the previous request, based on the Consumer’s ID and return the results.

This Consumer-generated ID is an idempotency key.

When a dangerous or difficult-to-undo operation must be performed, but it cannot be made idempotent without more context, use an Idempotency Key. Common examples are when creating data in a third-party where that data has a cost, or cannot be easily removed or changed to handle intermittent failures.

This is a difficult pattern to get right, as each Consumer of a service must properly and carefully design its key. It also requires careful implementation in the service to ensure that the operation of writing the idempotency key and performing the work are themselves idempotent. 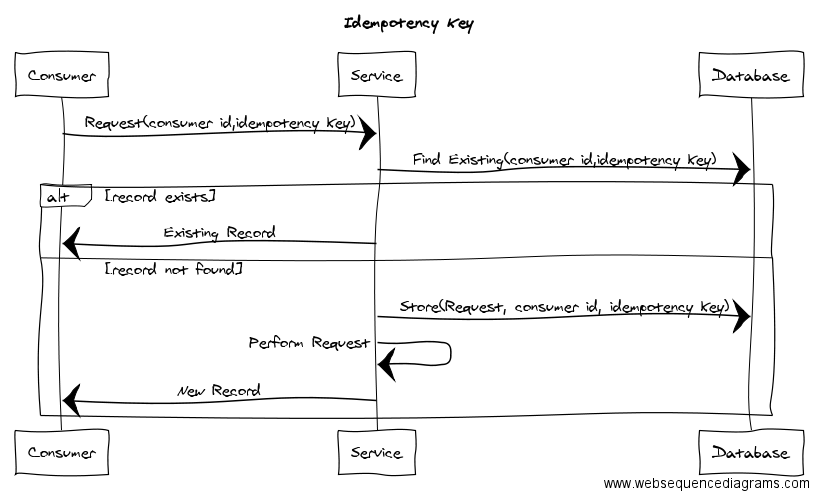 To make this pattern work, you must choose the right algorithm for calculating your idempotency key. Always remember what you are trying to prevent. You don’t want the same logical operation to be actually performed more than once.

Getting the right algorithm will require playing-out scenarios to see what will happen. Start with playing out the scenarios with no idempotency key:

From there, replay the scenario with different key algorithms. Start simple, such as the primary key of something being operated on. Often you’ll need to incorporate a time component, for operations that are legal multiple times, but not multiple times in quick succession. You can account for this by adding days or weeks between retries in your scenario and playing out what would happen versus what should happen.