At Stitch Fix, when we want to understand the impact of some treatment or exposure, we often run an experiment. However, there are some questions we cannot answer via experimentation because it is operationally infeasible or because it doesn’t feel client-right. For example, we wouldn’t experimentally require stylists to style at specific times of day (most of our stylists work flexible, self-scheduled hours) or experimentally subject clients to poor inventory conditions. In those cases, we rely on observational analysis. The key challenge in this setting is that the treatment has not been randomly assigned, which means that we may have issues with confounding (for more on causal structures, see this previous blog post). Our goal is to learn something true and be as precise as we can; a t-test is not going to cut the mustard here.

One common approach to the challenge of confounding is to use a regression model to estimate the effect of the treatment, including confounders as covariates. Unfortunately, for a regression estimator to do its job properly, you have to specify the model correctly. If you fail to specify the model correctly (misspecification), you may think you are fully controlling for confounders when you are not[1].
Another way to tackle this is to do inverse probability of treatment weighting, where you focus your regression efforts on learning the probability of treatment. But this modeling task suffers from the same risk - misspecification - and isn’t terribly efficient. We rarely have a clear understanding of the potentially complex relationship between covariates, treatment/exposure, and outcomes and yet many of us make unilateral model specifications daily (YOLO?).

Enter: double robust estimation. This class of estimators explicitly acknowledges our human frailty when it comes to correctly specifying the relationships between exposure/treatment, covariates, and outcomes. As luck (errr math) would have it, these methods give us some wiggle room to make a few mistakes and still come out with a consistent estimator. And if you don’t have model misspecification, these estimators are as efficient as it gets[2]. The goal of this post is to demonstrate both the superiority of double robust estimators and the low overhead to using them. For more background, see our previous post on what makes a good estimator.

We are going to focus on a method called Targeted Maximum Likelihood Estimation (TMLE) for the purposes of this post but there are other double robust methods including Augmented Inverse Probability Weighting (AIPW) and Generalized Random Forests (GRF).

Before we go on, some quick vocabulary housekeeping:

We’re going to do a simulation study comparing three different estimators of the ATE using R: 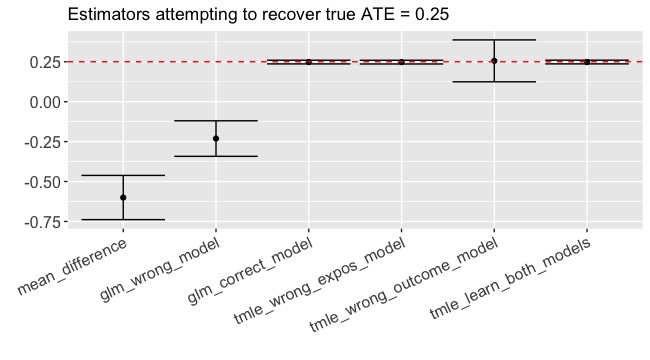 We will simulate a data-generating process with an exposure for which the we know the true ATE and see how well each method estimates the target parameter. In this simulation, the true ATE = 0.25 and the probability of treatment is a function of some covariates. The outcome is a function of both the treatment and the same covariates, which means that there is confounding:

The function f(.) above is a simple scaling function mapping continuous values to the unit interval (see simulation code below)[4].

If we were analyzing this in the most naive way possible, we might just do a t-test on the difference of means between the exposed group (A = 1) and the unexposed group (A= 0).

Yikes! Recall that the true ATE = 0.25. We’re VERY confident in an estimate that doesn’t even have the right sign! This is a great example of when confounding biases the naive estimate.

Ok, next up, a generalized linear model (GLM). We know \(W_1\) and \(W_2\) are confounders. In a main terms regression model \(Y \sim A + W_1 + W_2\), we interpret the coefficient on A as the impact on Y of A=1 compared with A=0, holding \(W_1\) and \(W_2\) constant. In other words, it’s an ATE estimator. Many of us have been trained to start with this kind of main-terms model when we lack specific knowledge about the functional form of the relationship between Y and A,W.

Feeling a little sweaty. What we just did is not an uncommon approach to estimation, yet we are still getting the sign wrong (-0.23 instead of 0.25!!) and we are pretty confident about our result (p < 0.001). This is the result of model misspecification. A correctly specified GLM that contains the \(W_1*W_2\) interaction would have given us an unbiased estimate. The question is, how often would we have known that \(W_1*W_2\) was an important interaction? If we had many more covariates, would we feel comfortable specifying a model with all their interactions? Probably not. And for that matter, can a GLM even describe the true relationships that we face when we leave toy-data-land? Many of us were trained to be parsimonious in model specification but here is an example of where it bites back.

OK, time to bring in a double robust method (TMLE). When we use the R package tmle, we have the opportunity to estimate the propensity score and outcome model more flexibly using machine learning via the SuperLearner package. SuperLearner uses generalized stacking to create an optimally weighted combination of diverse sub-models. The weights are a function of cross-validated risk. The sub-models could include different glm specifications, splines, and other machine learning prediction algorithms such as generalized additive models (GAMs), elasticnet regression, etc… Using SuperLearner is a way to hedge your bets rather than putting all your money on a single model, drastically reducing the chances we’ll suffer from model misspecification.

A little note about what we are specifying in the tmle function:

First, suppose we let tmle estimate the outcome model (Y~A,W) using SuperLearner but we will deliberately misspecify the functional form of the exposure model to put the double robustness to the test by omitting the interaction between \(W_1\) and \(W_2\). Recall that only one of these models needs to be correctly specified in order to get a consistent estimator:

Daaaaaaaang! First, let’s note that the estimate is almost smack-dab equal to the true value of 0.25. Second, are you seeing that confidence interval? It’s the size of a baby’s toenail clipping! Contrast that to the GLM confidence interval (ignoring for a moment its complete lack of validity) with a width more like a meatball sub. Recall that we got this glorious estimate despite the fact that we deliberately misspecified the exposure model.

Much bigger confidence interval this time - but the estimate is very close to the true ATE of 0.25.

Let’s see what happens when we let SuperLearner take care of ALL of the modeling decisions so that we hopefully have two correctly(ish) specified models:

A thing of beauty, truly.

In a world where we are still specifying the structure of glms by hand, TMLE provides a nice safety net. But what really supercharges this method is the ability to take advantage of all kinds of fancy predictors (nonparametric models, machine learning methods, etc…) when modeling E(Y|A,W) and P(A=1|W). These methods may not even be interpretable on their own which makes them challenging to use for inference. But luckily, TMLE doesn’t require their interpretability, it just requires their predictions. So these more nuanced predictions can be dumped into TMLE and out pops a potentially better estimate of our target parameter benefiting from local efficiency.

Let’s make the same methodological comparison on an exposure that’s been randomized (more commonly called a treatment). In this case, all of the methods are consistent estimators given the data generating process but using the combination of tmle and SuperLearner to estimate efficiently and avoid misspecification leads to smaller confidence intervals (Figure 2). Again, if we correctly specify the functional form in the glm, we do practically just as well but not better than tmle. So using TMLE won’t hurt and it might help! 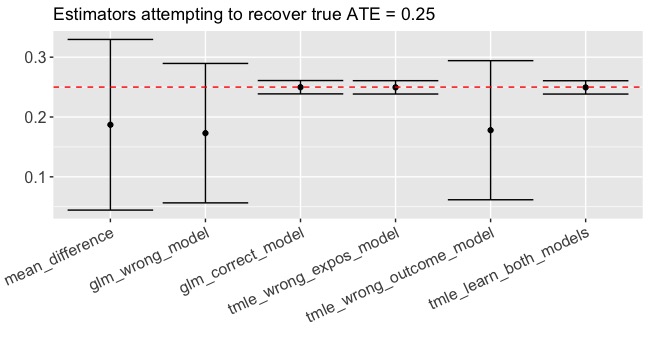 Plot 2. ATE estimates from simulated data with randomized treatment where the true ATE = 0.25.

Hopefully we’ve convinced you that there are major advantages to using double robust estimation techniques in terms of consistency and efficiency. We’ve also demonstrated that the overhead to execute these more advanced methods is minimal. There are existing packages in both R (tmle) and Python (zEpid). If you want to better understand the mechanics of TMLE in particular, we highly recommend this very accessible paper which goes through the calculations “by hand” without relying on package infrastructure.

Here are some of scenarios in which we use this methodology at Stitch Fix:

A few more things that might come in handy!

Suppose you happened to know the exact propensity scores P(A|W) because you ran an experiment where you controlled the probability of treatment (regardless of whether it was fixed or dependent on W). You can supply that information with the argument g1W instead of supplying a model specification or list of SuperLearner libraries for the propensity score.

Suppose your observations are not independent but instead clustered within subjects in some way. You can specify a subject_id in order to correct for this dependence so that your standard errors are not overly optimistic:

Targeted maximum likelihood estimation for a binary treatment: A tutorial

[1]↩ You can even induce bias by including features which are downstream of the treatment. This is why understanding causal structure is important. If you include the wrong stuff, doubly robust estimators can’t help you out of that one.
[2]↩ Even under misspecification, these methods may still be relatively more efficient than your garden variety regression model
[3]↩ Recall that a consistent estimator is one that is getting closer and closer to the target parameter as n gets infinitely large
[4]↩ Note that we are explicitly bounding P(A = 1) away from both 0 and 1 (see simulation code). In the real world, this is an assumption you have to be willing to make; that treatment assignment is not deterministic.
Tweet this post! Post on LinkedIn