Back in September – before the start of the 2015-2016 NBA season – we wrote a post about the Golden State Warriors that was titled “Strength in Numbers: Why Golden State Deserved to Win in All.” The post explored whether Golden State got lucky last season. Were they carried by their momentum and aided by injuries to the opposing teams, or did they simply have the best basketball DNA? Our conclusion was that Golden State did indeed have the best DNA, although the final series against Cleveland would have been a very close series if Kevin Love and Kyrie Irving had been healthy.

To answer that question, you have to analyze how Golden State matches up against the San Antonio Spurs and the Cleveland Cavaliers. There are many other strong teams in the NBA, sure, but San Antonio and Cleveland are generally considered to be the main obstacles.

Now, we all know what happened when Golden State played these teams earlier this season: a close win against Cleveland at home, a 30-point win over San Antonio at home (sans Tim Duncan), and a 34-point win over Cleveland on the road. These results could easily lead one to the following conclusion: Cleveland and San Antonio are not real threats and, barring any significant injuries to a key player, Golden State should feel good about their chances of a repeat.

Not being satisfied with the analytical robustness of mere reasoning, we consulted the model described in the post mentioned above to determine how Golden State’s DNA matches up against Cleveland’s and San Antonio’s. The short answer is that, according to our model, Golden State should be worried about both teams – although San Antonio appears to be the bigger threat of the two.

As mentioned in the previous post, the model used to evaluate these scenarios is based on team “DNA” – i.e., player archetypes – and purposefully ignores winning percentages and momentum. Momentum comes and goes, but solid DNA does not.

In short, the model will predict a win for a given team if, compared to the opposing team, there’s a sufficient “surplus” of minutes allocated to powerful archetypes. Some technical notes about this model:

For more details on this see the post from September.

San Antonio is the Biggest Threat

Let’s take a look at what the model would have predicted for the three games mentioned earlier:

Before we interpret these results, let’s first remind ourselves that this model ignores win percentages and momentum. As stated earlier, this is done on purpose in order to purely compare the DNA of each team. For reference, the model has only made five incorrect predictions for the Warriors for this season. The game against San Antonio was one of them, and the other four were the losses against mediocre teams (Dallas, Detroit, Milwaukee, and Denver).

So what does this mean? It means that Warriors fans, such as the Data Science team here at Stitch Fix, should be worried about the Spurs. Despite what the win might suggest, the Spurs match up well against Golden State and tend to rise to the occasion in the playoffs.

We can visualize these results by scatter-plotting the importance of the archetypes against the surplus/deficit of minutes allocated to each archetype. Here importance reflects the coefficients of the logistic regression model mentioned above – i.e., the impact on win/loss for every unit of surplus for the given archetype.

Some notes about these plots:

Note that we see a mix of green and red dots for the Cleveland and San Antonio. These are going to be hard-fought series for Golden State if we meet them in the playoffs. 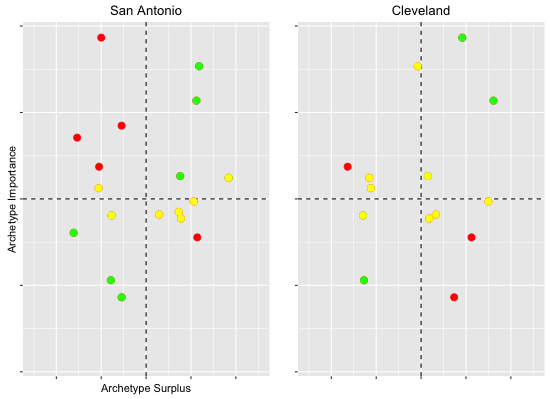 Now, what about Oklahoma City and the Los Angeles Clippers? These teams are right behind the Spurs in terms of winning percentages and Oklahoma City is currently number three in the overall ESPN Power Rankings. Should Golden State be worried about them? According to the model, Oklahoma City and the Los Angeles Clippers pose much smaller threats than San Antonio and Cleveland. For reference, the model predicts a 60-70% chance that Golden State will win a given game against either team. The charts below illustrate this; there are almost no red dots. 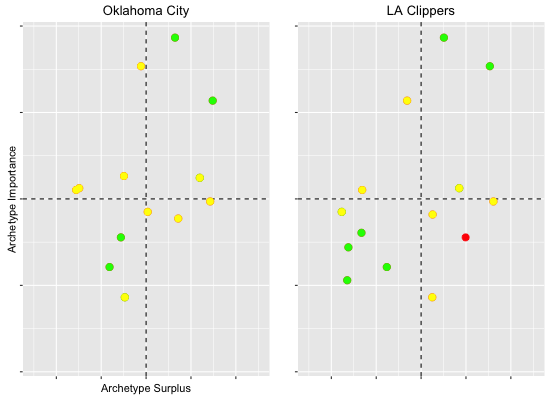 The main take-away is that Golden State has a deep and diverse roster. For any given game, they’re able to create a surplus of minutes allocated to powerful archetypes and hence put themselves in a position to win.

The problem here is that San Antonio also has a deep and diverse roster. If they are healthy come playoff-time, they will pose the most serious threat to Golden State’s title repeat (according to the model).

It gets even more interesting when we start to look at the players behind the archetypes. But that’s beyond the scope of this post. Although we should reveal that one of the persistent green dots in the upper-right quadrant is fueled by no other than Shaun Livingston.